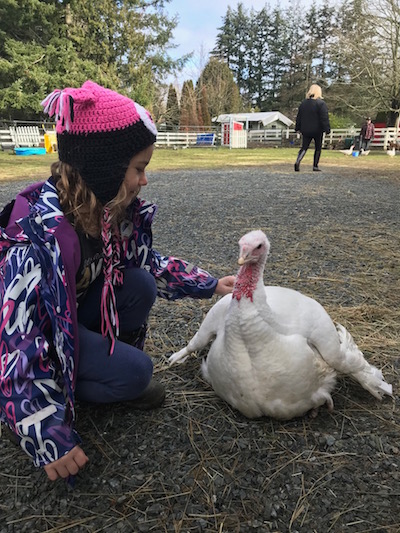 Ruby came to us on a sunny day in July and we said our goodbyes to her on a beautiful sunny day in March. How could 9 months go by so fast? Summer, Fall and Winter in the blink of an eye and Spring just around the corner. So close, but it was not meant to be.
Ruby especially loved kids and would have worked miracles in our Spring Children’s Program starting next week.

But what an amazing 9 months it’s been getting to know this divine being. Of all our animals, she was the one who seemed to always be in the middle of things no matter what you were doing. She was definitely looking for any food that might be involved, but she was also super curious and inquisitive. Always with a “bboopp, bboopp, what you doing.” She had the most amazing vocals and I was just starting to get to know what a few of them might mean. I wanted way more time with her to understand her ancient language. She came to us with all her instincts and mother nature’s wisdom intact even though she was born in an industrial scale machine, including incubator, conveyor belts, and steel warehouses.

Ruby was doing so well at the farm, that I got my hopes up that she would beat the health issues of factory birds. Of all our animals, she and Louise have had the most vet visits. But unlike Louise, she was unable to beat the odds.

We lost Pearl in January due to prolapse intestines and I told myself it was because she came to us with a hernia. I got my hopes up, and thought because Ruby didn’t have a hernia she would see her golden years. Ruby started laying eggs a little later then Pearl, and was pretty consistent with one egg each day. Her eggs were just the same as Pearl’s – massive, hard-shelled orbs that one could easily imagine were taking it’s toll on her body. She laid an egg Wednesday afternoon (March 20) and seemed fine when she was put in the barn for the night. My hopes were crushed when Chris and I got an emergency call the next morning from Anna that Ruby had prolapsed intestines (just like Pearl). We made arrangements to take her to the vet, and I kept telling myself that this time our vet would be able to help.

Chris and I were on our way to Ruby’s vet in Abbotsford, but did a quick u-turn when I called and was told that Dr. Ken was not at the hospital but was at Grouse mountain treating the bears there. I called Langley Animal Hospital and had to wait to hear back when the farm vets could make it to our farm. Dr. Tom called and asked me to describe the problem – he asked how much intestine was showing. I said there were several feet. He told me to keep her intestines moist with a wet towel there was hope they could be pushed back in. I have researched that some birds can be saved from a prolapse, but I think Ruby and Pearl’s prolapse is nothing like that described online.


Dr. Aaron arrived and gave us the bad news that some of her intestines had torn and there was no hope to save her.  She was euthanized with many of her barn yard friends gathered round.

Ruby was 9 months old, 6 months older than the age her flock was when slaughtered. White breasted commercial turkeys have been selectively bred over the years to grow very large, very fast with a desired trait of big meaty breasts. No thought has been given to the health issues that this causes: legs and feet that can’t hold up the weight, reproductive system of smaller birds, internal organs that can’t sustain the needed blood and oxygen flow, and nutrient deficiencies because the fatty tissue takes priority.

When we first got our two baby turkeys, I wanted to give them jewel names because I knew they were going to shine bright and reveal beauty that the industry wants to keep hidden from us in steel warehouses.

Ruby & Pearl came to us ragged and torn.  With kindness and care, they became a beautiful polished jewel.  I am so happy we gave Ruby and Pearl a home. I am so happy with the life they had at the farm. I am so determined to figure out how to help these birds and I won’t give up on rescuing more.