In the spotlight: Marilyn Gough 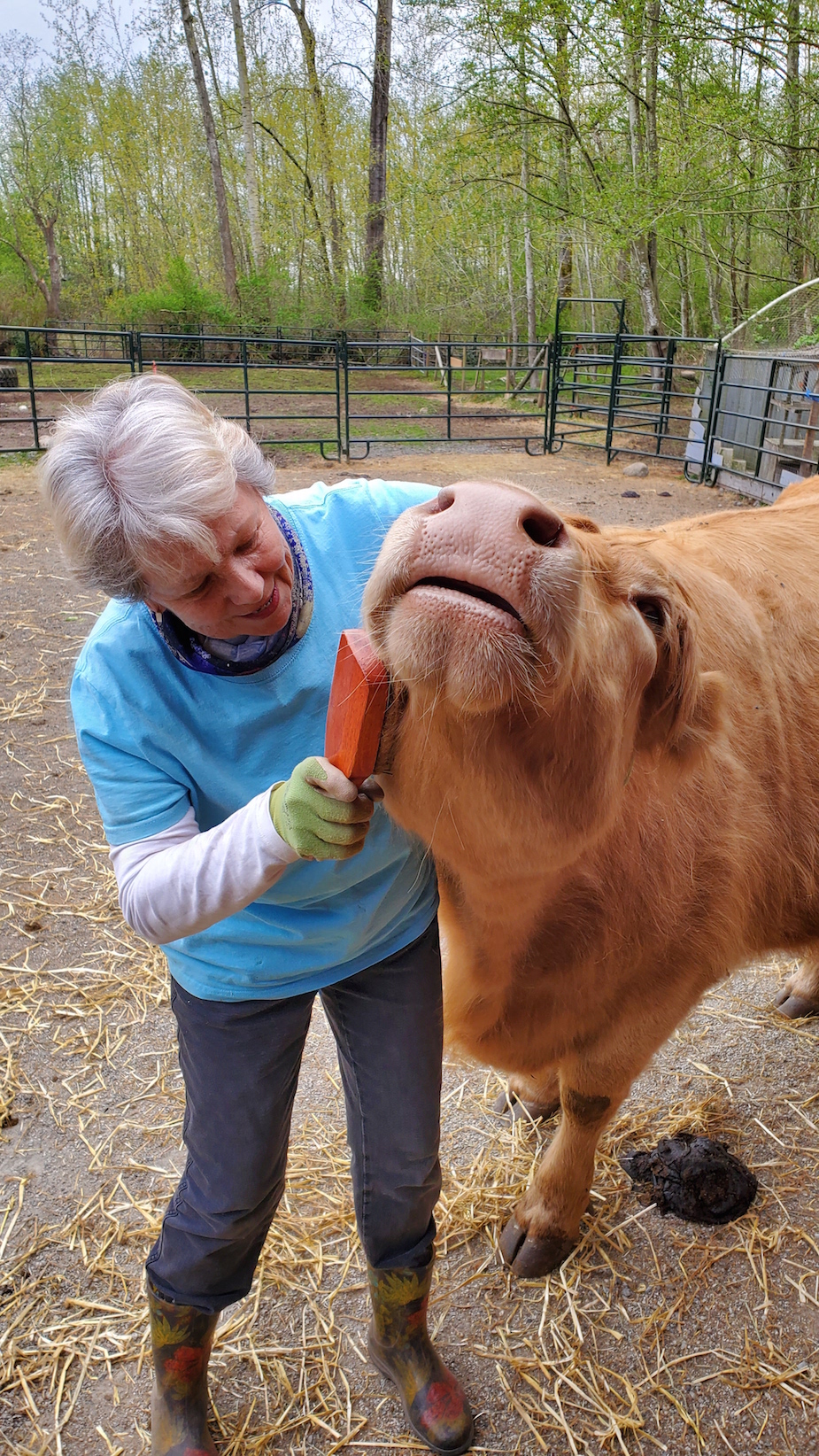 I grew up on a farm in rural Manitoba and my earliest memories are of lots of interactions with animals. I sought them out, even as a toddler and formed strong bonds with all of them. They were my friends and companions in good times and bad. My parents were mostly grain farmers but did have some dairy cows for milk and butter and chickens for eggs. I recall laying on my favourite dairy cows back, reading comic books as she grazed. I was creative in how I got up on her back and she was obviously very patient. She seemed to love to have me with her. The climate was pretty harsh in Manitoba in the winter so I made sure that all the stray cats that showed up at the farm had a warmer place to sleep and food in the loft of the barn. Most went their separate ways in the spring but some made our farm their home.

I was fortunate that my parents instilled in me a respect for all living things and the need to give back to others. They always said you get back way more than you give in terms of enriching your own life and soul. Of course, being able to receive is also part of this equation and at age 71, I think I am making some gains in that department.

During my teens I convinced my parents to rescue a neglected and abused horse who was going to go to slaughter. She was a total bone rack and distrusted everyone around her. I got a few kicks and bites before she started to trust me and then trust the rest of my family. She gained weight and was the most loving, playful and mischievous horse. I could talk to her about anything, just like my other animals, without worrying about judgement.

After I left school I worked for a while at various jobs until I knew what I wanted to make my life’s work. No surprise I chose nursing and Health Care Social Work. I got accepted to both but decided to go with Medical Social Work. I felt strongly that many patients and families in hospital had significant, psychological, social, work related and family stressors in their lives that contributed to their illnesses in a significantly negative way. I found my work with patients and families very fulfilling.

I was presented with lots of situations that took some creative thinking to make them work. I once convinced an internist in ICU to write a prescription for one cigarette a day to one of his cardiac patients so she wouldn’t sign herself out. Prior to admission she was a 2 pack a day smoker. I agreed to accompany her on a balcony off the ICU once per day to have her smoke until she was well enough to go home. I was amazed that she agreed to do this as we all know how addictive smoking can be. While she smoked her one cigarette, it gave us a great opportunity to talk and explore the issues related to her illness. She was discharged much healthier and came back to see me months later a healthy nonsmoker!

Not all my outcomes in health care had the same satisfying end, there were many tragic situations but I always tried to make my patients and families feel seen, heard and respected…not just another number in an overwhelmed medical system. This essentially is the same way I feel about animals. I feel I have learned so much from both species.

Being brought up on the farm, I also developed a strong connection to nature. Fortunately the man I fell in love with and married has the same connection. What he has that I don’t have, however, is the brave spirit to try new things. He taught me to step outside my ‘prairie raised’ comfort zone. As a result, we have travelled the world and participated in many adventures such as kayaking the Queen Charlotte Islands, bike riding 490K on the Kettle Valley railway and training to be volunteer assistants in Paleontology in the little town of Borrego Springs in the Anzo Borrego State Park. Through all this, volunteerism has been central in our lives. We have volunteered for such things as: thrift stores that support the care of animal companions to low income people; the American Red Cross when the little town of Paradise in California burned down; helping to start a film festival in Borrego and assisting ESL teachers in Mexico. Our motives have not been purely altruistic. We have learned so much ourselves and have been so enriched by all these experiences.

So… when a good friend (Terry Pratt) told me about Kindred (then SALI), I grabbed at the chance to become a part of it. I read everything on their website and joined the next available volunteer training. My time there has not always been consistent due to my frequent travels in spite of this my Kindred family have always been so welcoming and appreciative of anything I can offer. I felt that I have connected with a kind, compassionate group of people that believe wholeheartedly in what they are doing for our animal/human friends in need.

It’s hard to describe how attached I have become with all of the animals on the farm. Fortunately, I have been able to share this love with my niece Eva, who is as crazy about Kindred as I am. The human/animal bond is truly amazing. I am learning more every day thanks to Chris and Keryn and my fellow volunteers…especially Linda on Fridays.

Thank you Keryn for founding Kindred. You are my hero.